At some point a couple years back, Maria Flora decided that there isn’t much, really, that she could do about the state of international affairs, or the tumult of national politics and what’s happening in Washington.

“But I can have an impact on my immediate environment,” Flora says, “and that’s why I decided to throw myself into the Park Hill Golf Course issue and out of that, [became] interested in serving on the Greater Park Hill Community board.”

And so in retrospect, 2021 for Flora was one fabulous year. All activities culminated in a defining moment on Nov. 2, election night. After months of foot-soldiering across Denver with other pro-park and open space campaigners, Flora walked into the Abbey Tavern on Colfax.

The bar was the official Initiative 301 campaign party headquarters. It was 8 p.m., just an hour after the polls had closed.The electricity in the room housing the underdog effort was at high buzz. Initiative 301 — which provides additional protections for the conservation easement on the Park Hill Golf Course property — was kicking butt. In a landslide. And, Initiative 302 — the high-dollar counter-effort funded by the developer Westside Investment Partners in an effort to confuse voters and nullify 301 — was losing. In a landslide.

“It was jaw-dropping for me,” Flora says. “I did think we would win, because when we were dropping literature all over the city and delivering signs and copies of the Greater Park Hill News, I got good vibes from everybody about 301, and the need to protect that land. But I didn’t think we would win 2-to-1. You can imagine how happy that made me feel.”

“It’s just so big I can hardly get my brain wrapped around it.”

Flora is an attorney, now retired. As a bankruptcy expert, she traveled a career path through the ebb and flow of Denver’s boom and bust economy, and, of course, life.

As a young lawyer, she envisioned herself focused on women’s rights and criminal defense. But when she and her husband, Hank Bootz, arrived in Denver in 1975, the city was in bust cycle, and she was happy to land a government job with the Small Business Administration. From there she joined a small private law firm, and then became head of the bankruptcy department of the powerhouse 17th Street law firm Gorsuch Kirgis LLP. In the 90’s, with two kids approaching their teens, she dropped out of the business of law for eight years.

“I started seriously skiing, mountain biking, hiking and having fun and raising kids,” she says. When she elected to go back to work, hanging her solo shingle, she felt rusty. But having a reputation as being decent and reasonable paid off; within six months her caseload was full. 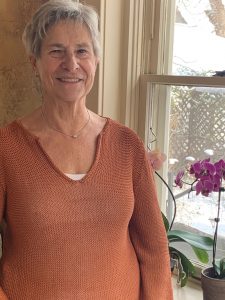 In 2016, Flora packed up her office for a final time, trading it for a retirement filled with more skiing, hiking, camping and cycling with girlfriends, and with her favorite partner, Hank. Their two kids are now grown. Parked in their driveway and ready to go any time is a Lance 850 truck camper — Flora’s version of paradise on wheels. They take to the road as it suits them, including one recent, joyful trip to Alaska.

In her retirement Flora also began attending GPHC registered neighborhood association meetings, and joined the board three years ago.

Getting in the weeds

Flora was initially inspired to get active in neighborhood-level politics by her love of parks and open space.

She was — and still is — bothered by the city’s controversial 2015 Fairfax Park land swap, which resulted in a public park ending up in the middle of the Park Hill Commons residential and commercial development at 29th and Fairfax Street. The park finally opened there last summer. The people using it so far, appear to mainly be white customers of the surrounding shops and residents of the new apartments on the block. The absence of longtime area BIPOC residents using the park bothers Flora and, she notes, she is not alone in that disappointment.

Last summer Flora embraced a decidedly less controversial project: volunteer gardener at City Park. She and dozens of others from the organizations City Park Alliance, City Park Friends and Neighbors and Greater Park Hill Community, Inc., signed up to maintain the garden beds in Denver’s crown jewel park, just west of Park Hill. Working in teams with names like “Weed Eaters,” and “In the Weeds,” the groups pruned roses, pruned lilacs, flicked Japanese beetles off roses, and ripped out bindweed by the yard. Volunteers took on this job in the midst of the pandemic, as the city’s parks and recreation department was short-staffed.

“From time to time I’ve been a pretty harsh critic of Denver Parks and Rec,” Flora says.

“I think they are pretty wrongheaded a lot of the time. But the net result [of the pandemic] is they’ve been as short-staffed as anyone else, so this is my one time when I am trying to play nice, trying to do something positive that does not require filing a lawsuit or waving a sign or showing up and griping at meetings.”

Also in the summer and into the fall, Flora’s efforts were laser focused on working to preserve the conservation easement on the 155-acre Park Hill Golf Course land at 35th and Colorado Boulevard.

Already a member of the organization Save Open Space Denver, she volunteered her time campaigning to convince voters to pass Initiative 301. The diverse SOS group includes a broad representation of the makeup of the neighborhood: Black, white and Latino, young and old, rich and poor, and all ranges in between.

Read all about it!

Flora is a big fan of democracy. It’s not a big surprise, then, that she is also a big fan of the Fourth Estate. She has a healthy respect for journalism’s role in preserving, or at least maintaining, a healthy democracy.

In Park Hill, she has been a blockworker for decades — delivering the Greater Park Hill News to her neighborhood (Flora’s disclosure: She gets the credit for being a blockworker, but her husband, Hank, often executes the actual task of delivering newspapers every month to their neighbors.)

During the pro-Initiative 301 campaign, Flora and other activists fanned out around Denver to educate voters and make their case for why the easement should be protected.

Part of their efforts included distributing copies of the Greater Park Hill News, including to parts of Park Hill that don’t have delivery volunteers and so don’t have paper delivery. Flora and other volunteers also left copies of the newspaper — which has heavily covered the issue — with people in other neighborhoods, including Congress Park, City Park North and South, Mayfair, Skyland, Washington Park and Cherry Creek.

Most of these neighborhoods are news deserts — they have no local newspaper. And the residents that Flora encountered appreciated getting a newspaper more than she could have imagined.

“It was like, read all about it folks!” Flora said about handing out the Greater Park Hill News. “I keep expecting to be run off, but everybody wanted that newspaper — they were so excited to get the newspaper. No one did not want to read that newspaper.”

Proud to take a stand

After the campaign, Flora took a trip to Florida to kayak through the mangroves of the Everglades, and to recharge.

She knows the saga continues.

She wishes the city would take the recommendation of its own Parks and Recreation Advisory Board and buy the land for a regional park.

But since the election, the developer, the mayor, and his city administrators are continuing to promote what they call a “vision” for developing the Park Hill Golf Course property — “forging ahead, as if nothing had happened.” It’s as though, Flora notes, the city’s leaders are living in an alternate universe — refusing to heed the will of the voters, or even acknowledge the protective conservation easement on the property.

She’s proud, she says, of her colleagues at Greater Park Hill Community, Inc. Some people, she notes, have criticized the board majority in recent years for taking strong positions on controversial issues, including voting twice to support keeping the Park Hill Golf Course as open space. (The board’s position was bolstered by the November election, as well as a 2019 neighborhood survey that determined an overwhelming 77 percent of the neighborhood wants the land to remain open space.)

Says Flora: “To me that is what Park Hill is all about, and what the board should be doing — expressing an opinion and not being afraid to come out against or in favor of an issue. Taking a stand and actively advocating for our neighborhood.”

News Of The Neighborhood

Extra! Extra! You Too Can Be A Hero 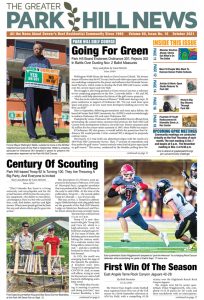 The Greater Park Hill News began publishing in 1960, delivered via a unique and ingenious system. Here’s how it works:

Every month the editor, sales manager and art director produce a new issue of the newspaper, filled with stories, photos and advertisements. The issue is sent to the printer, and the next day, the printer drops off stacks of the finished product to the GPHC office, at 2823 Fairfax Street.

A small group of dedicated volunteers then breaks the newspapers into smaller bundles to be delivered to businesses and homes across Park Hill. The bundles include a sheet of paper with the name and address of the person who will receive them.

Quincy Jackson, the delivery driver, then picks up the bundles of newspapers from the office and delivers them to the corresponding residential and commercial addresses. Volunteers – called blockworkers – then take the small stack of newspapers and walk around their square block. They leave a newspaper on each doorstep for their neighbors. It takes maybe 20 minutes. (At businesses, the newspaper is distributed in racks, which are generally located night next to the entrance/exit.)

Currently 13,000 newspapers are distributed this way to homes and businesses in and around the neighborhood.

The system works pretty well, as long as there is a volunteer on each block who is willing to do what is arguably the most important job at the newspaper – make sure readers get the paper so they can read it. (Click here for the names of current blockworkers.)

Some Park Hill blockworkers have been at it for years — even generations — and every month the new issue arrives like clockwork. However, delivery of the newspaper in some parts of Park Hill has been less reliable over the years, particularly in the north and northeast quadrants of the neighborhood,  where there have historically been more rentals. Turnover of blockworkers tends to be higher in these areas, leading to less consistent delivery.

If you are interested in becoming a blockworker and delivering newspapers to your neighbors every month, contact newspaper manager Melissa Davis at newspaper@greaterparkhill.org. If you are already a blockworker or receive the newspaper every month, you can also sign up to deliver the paper to another block in Park Hill — contact Ms. Davis for a plan that works best for you.