On June 14, the Park Hill United Methodist Church parking lot will become an authorized Safe Outdoor Space for six months, providing tents and a vast array of support services to 40 people who currently have no home.

The project, coordinated by the organization Colorado Village Collaborative, has drawn a phalanx of supporters who are readying to help set up the site, provide meals and supplies, and volunteer.

The organization, as well as the church that is hosting the safe outdoor space, was undeterred by a lawsuit that tried to stop the project from moving forward. The suit, filed by a handful of neighbors, was dismissed last month.

Plaintiffs argued that the site, in a primarily white area of the neighborhood with high-end homes, lacks resources, including access to stores, restaurants and public transportation. They also alleged the site would lack adequate security measures to protect children and staff at the preschool that operates at the church. The suit also claimed the tent community will reduce the number of available parking spots at the church, which shares its space with Temple Micah, and make it difficult for nearby residents and their guests to find parking spots on Sundays.

During a public meeting held via Zoom in April, the lead plaintiff in the lawsuit, Kurt Monigle, threatened to block the project, and asked Colorado Village Collaborative Executive Director Cole Chandler to find another location.

“If we lose we will make your life miserable the entire time,” said Monigle, who lives on 17th Avenue Parkway several blocks away. The other plaintiffs live on the block of Glencoe Street nearest the church.

The lawsuit drew national media attention, in part because it was the first of its kind, and in part because its optics are in conflict with Park Hill’s long history of progressive politics and social activism. In the early 1960s, church Pastor J. Carlton Babbs was a founding member of the Park Hill Action committee, working to integrate the neighborhood.

When the suit was first announced, the Colorado Village Collaborative issued a statement vowing to move forward, which read in part:

“The plaintiffs suggest that a lack of existing services, public transportation, existing unhoused individuals, and the presence of children and families make Park Hill an unfit neighborhood for our unhoused neighbors to call home.

“These are precisely the kinds of well-funded arguments we have heard before in efforts to advance and protect various forms of segregation and oppression throughout our nation’s history.

When given the option, time and again, some groups of powerful individuals seek to choose their neighbors along lines such as class, race, religion, sexual orientation, and other forms of oppression. When the arc of justice has prevailed in these historic examples a clear and simple truth has been revealed: no one gets to choose who lives next door.”

The lawsuit resulted in an outpouring of support from other neighbors for the Colorado Village Collaborative and the church. 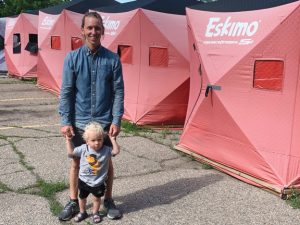 “Given the rancor (and frankly some hostility) I’ve observed in regard to the SOS residents, how will the neighborhood ensure that we will work to keep residents free from harassment?” asked Terrell Curtis in one social media post. “What are we willing to do as a neighborhood to ensure that [the new residents] are treated respectfully?”

“It’s good to see an actual innovation that is finally addressing a real issue in this city,” said Cashman. “I’m excited to see how it works, and hopeful that it does. Much better idea than random camping (which is what I thought this was at first). Well done, folks. Officially cheering you on.”

“We … believe that every wealthy neighborhood, like ours, should do its part,” wrote Fine, who lives about two blocks away. “We are confident we will all be fine during and at the end of the project and we hope that a few of the project’s residents will have found permanent housing.”

Tracey MacDermott, the chair of Greater Park Hill Community, Inc., hopes neighbors will rally and make the program a great experience for everyone. “We have done it before in Park Hill; hopefully we can do it again.”

The program is designed to address the growing crisis of homelessness in Denver, which is part of a national trend. Thousands of people in Denver are without permanent homes. An official count in 2020 showed that 1,000 people are on the streets on any given night. The pandemic has served to displace even more people, experts say.

The Safe Outdoor Space is unlike the unauthorized tent communities that have spread across downtown and into the Uptown and Congress Park neighborhoods, as well as many other areas of Denver over the past year. Rather, the SOS includes high quality, uniformly spaced tents with cots and electricity for heat and fans. There are port-o-potties on site, garbage cans, shower and laundry services and meals. The residents have access to health and other support services. The entire site is enclosed with a fence, and it requires a passcode to enter. The program is designed to help both recent and chronically homeless people transition to permanent housing. The site will remain operational through the end of the year.

Since December, the Colorado Village Collaborative has hosted two similar temporary Safe Outdoor Space projects in church parking lots close to downtown. Numerous officials, including Denver police and neighborhood organizers, have reported no increase in criminal complaints or other problems in those locations. Travis Leiker, chair of the Capitol Hill United Neighborhood association, said that many people in the area were initially wary — much like those in Park Hill. Many of the initial critics, he says, are now supporters.

How To Get Involved

Timeline and Resources For The Safe Open Space

• May 28: Fencing will be installed around the site in the parking lot

Many neighbors have expressed interest in being involved in the project  as it moves into the next phases. Check out these links if you are interested in volunteering or donating supplies:

All Hail The Narwhal

Bugland: It’s a Hummingbird, It’s a Bumblebee, It’s A Sphinx!