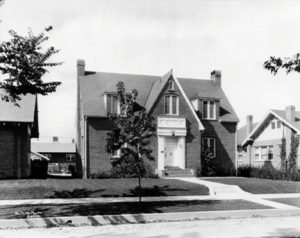 By Annie Levinsky and Becca Dierschow

A National Register Historic District provides honorary recognition – but no protections – to the area within Park Hill that is bounded by Montview Boulevard, 26th Avenue, Colorado Boulevard and Dahlia Street. Recently Park Hill residents, through social media and by contacting Historic Denver, Inc., have begun to ponder designation and whether seeking local historic designation is appropriate for one of Denver’s most notable neighborhoods.

Local historic designation is one method of ensuring that changes to a neighborhood occur thoughtfully, preserving the fabric of a neighborhood that people love — homes with history, vital dwellings with unique character and quality — while acknowledging modern lifestyles. The process of historically designating a neighborhood is careful, considered, and rests on neighborhood support.

As a result of the designation process, communities learn more about their history, preserve the essential features of their neighborhood, gain access to valuable tax credits for rehabilitation projects, and ensure that future changes to the area are compatible with the neighborhood’s most significant features.

How is a historic district created?

A historic district begins with outreach, research, and survey. Neighbors first meet informally to discuss the idea of historic designation, and its pros and cons. This can be done under the auspices of a Registered Neighborhood Organization, or simply by a group of interested individuals.

Often Historic Denver helps facilitate these conversations, providing information, resources, and guidance. If a community is receptive to the idea of historic designation, proposed boundaries are agreed on so the area can be researched and surveyed. 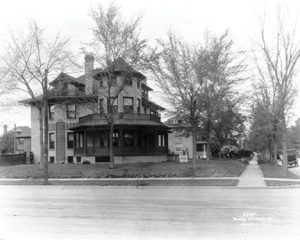 Boundaries are not arbitrary, but typically based on historical development patterns, such as original subdivisions, as well as natural geographic divisions. Historic districts are typically smaller than an entire statistical neighborhood and include anywhere from a couple dozen properties to a couple hundred.

With a preliminary boundary established, the group can begin documenting each property, noting the existing historic characteristics of the area. This information serves as the backbone for the historic designation application, which can be written by neighbors or by a qualified consultant.

Throughout the research phase Historic Denver recommends that there be extensive outreach so that all owners in the proposed boundaries are aware of the effort and understand the process as well as the effects of historic designation.

Once outreach and research are complete, a formal historic district application is submitted to the Landmark Preservation Commission, who discusses the application, takes public comment, and judges whether or not the application meets the high standards Denver requires of its landmarks.

The Landmark Preservation Commission is part of the City and County of Denver’s Community Planning and Development department. It is a mayoral-appointed committee comprised of nine members, who have backgrounds in history, architecture, urban planning, and landscape architecture.

If the proposed historic district application is approved by the Landmark Commission, it moves forward to the land use subcommittee of City Council, which sends the application to the full City Council for discussion. Again, public comment is solicited and council weighs public sentiment, historic significance, and other factors.

The whole process can often take over a year to develop a good application, gain neighborhood support and move through the city process.

What happens after designation?

For all properties in the district exterior changes that require a building permit are subject to Design Review by the Landmark Preservation Commission. Design review ensures that the changes are done in a manner complementary to the original structure, the surrounding houses, and the neighborhood.

The majority of projects, including standard rehabilitation work, reroofing, small additions, garage construction, and more can be approved administratively by city staff— typically only large scale projects such as major additions, new construction, or window replacement go before the full commission. Interior projects are not subject to design review, nor is exterior paint color.

Well over half of all projects are approved administratively in less than two weeks. In 2013, the approval rate for design review projects was 99 percent. Of the 398 approved projects, more than 80 percent were administratively approved, without formal Landmark Commission review.

What are the benefits of local designation?

The most significant benefit of local historic district designation is stability. Once you live in a historic district you can rest assured that the quality of your block will remain consistent, and the attributes that attracted you to the neighborhood in the first place will remain for your children and grandchildren to enjoy. This stability also leads to stable property values. During the great recession in the past decade there were far fewer foreclosures in historic districts, and both local and national studies have demonstrated that property values remain steady, or increase at a rate of 1 percent faster, than values in similar, non-designated areas.

However, just because you live in a district doesn’t mean you can’t make changes to your home. In fact, to encourage historic-home owners to restore, rehabilitate and update their homes the State of Colorado has a historic preservation tax credit program.

Owners of contributing properties in historic districts may receive a credit of 20 percent of qualified rehabilitation costs. These costs include such aspects as carpentry, painting, plaster repair, roofing, masonry repointing, electrical and HVAC, and window rehabilitation.

A tax credit is different from a deduction. A tax credit allows you to offset your taxes on a dollar-for-dollar basis. Between 1991 and 2010, Coloradans participating in the tax credit program have invested more than $98.5 million dollars in qualified expenditures.

Park Hill is a large neighborhood, and it is not practical to consider designating the entire neighborhood through one effort.

However, there are many sub-areas in the neighborhood that do meet the criteria for historic designation, whether due to their unique architecture, historical associations, or geographic relationship to key city features, such as parkways.

As Park Hill neighbors contemplate whether, and where, local designation is appropriate, it is helpful to focus on the basics, identify pockets of unique character, and engage in open dialogue.

Historic Denver will host an informational meeting about historic districts and historic designation on Tuesday, June 9, at 6:00 pm at the Park Hill Library. It is free and everyone is welcome.

Community Announcements Who We Are, What We Do