Araceli Velasquez came to the United States in 2010 when she was 19 years old. She fled her home country of El Salvador out of fear for her life amidst gang violence and political unrest.

In June of that year, 14 people were murdered on public buses in two separate incidences on the same day in the same city. The attacks were led by suspected gang members. Women’s lives are particularly vulnerable in El Salvador.

“El Salvador has the highest rate of femicide in the world, and miscarriage is punishable by 30 years in prison,” according to the American Friends Service Committee petition on behalf of Velasquez.

Since last August, Velasquez and her family have been in sanctuary at Park Hill United Methodist Church and Temple Micah, whose congregations share the building at Montview and Glencoe. From her makeshift apartment inside the building, Velasquez recently described leaving El Salvador.

“Once I arrived at the border with the U.S., I was detained. And then in detention I learned I could apply for asylum because of the violence I was fleeing, so that’s what I did.” Velasquez was denied asylum, but stayed in the U.S. out of concern for her safety. 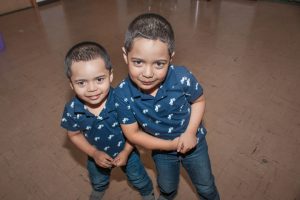 When Immigration and Customs Enforcement (ICE) came to her home in 2016, Velasquez was pregnant with her youngest child. A lawyer helped her apply for and receive a stay of deportation, which expired last July. She was denied an extension and a month later, she entered sanctuary at Park Hill UMC and Temple Micah She is the only member of her family who is undocumented. Her three children are U.S. citizens and her husband Jorge currently has Temporary Protected Status  — though TPS for El Salvador has been scheduled to terminate in 2019.

For Velasquez, sanctuary “means that I don’t have to be fearful that I’ll be separated from my family and that I can continue to fight my deportation in order to keep my family together.”

The New Sanctuary Movement, in which both Park Hill UMC and Temple Micah participate, has roots in the sanctuary movement of 1980s.

Faith leaders and activists helped people immigrate from El Salvador and Guatemala to the U.S. to flee the political violence that the U.S. initially refused to recognize as human rights violations. Dating further back, the tradition of sanctuary can also be found in the Hebrew Bible and the Torah, though with a different application.

Today, claiming sanctuary in a faith community means that the individual or family and the faith community decide to have a relationship that includes providing the person or people in sanctuary a place to live.

Sanctuary relies on a 2011 memo from ICE that ensures that “enforcement actions do not occur at nor are focused on sensitive locations such as schools and churches.” The memo contains some exceptions. The current administration has adhered to a policy of not entering these locations, but ICE agents have been known to appear near sensitive locations, including schools.

A period of discernment

A year ago, members from Park Hill UMC, Temple Micah, and other local faith communities attended an interfaith meeting on the topic of sanctuary hosted by Metro Denver Sanctuary Coalition. Afterward, Park Hill UMC and Temple Micah each entered a period of discernment about their capacities to offer sanctuary, and what they would need to be able to host someone at their building.

Steve Holz-Russell, co-chair of the Park Hill UMC trustees and a coordinator of the sanctuary taskforce, recalled starting the conversation practically. Their first priorities were identifying an appropriate space to house someone and “educating our community on what sanctuary is.”

The two faith communities also considered how they would connect and work together to support someone in sanctuary.

Once the initial conversations were completed, the process moved relatively quickly.

“Compared to other things we’ve done as a church, [deciding to become a sanctuary site] went lightning fast,” said Holz-Russell. The church took a vote in June of 2017 in which more than 80 percent of the congregation voted in favor of sanctuary. Those who did not vote in favor voiced concerns about logistics and possible retaliation from the authorities and others who might want to do the faith community harm.

Three candidates were interviewed to see if they wanted to claim sanctuary at Park Hill UMC and Temple Micah. “Metro Denver Sanctuary Coalition brought Araceli to us, but Araceli chose us,” said Holz-Russell.

Velasquez and her family moved in shortly after her interview. The apartment where the family would be living was still not complete. For about five weeks, they stayed in the youth room until remodeling was completed.

‘What needs to get done?

The two faith communities have worked together to make Velasquez and her family comfortable and cared for. UMC lead pastor, Rev. Nathan Adams, describes the ongoing work as very pragmatic. Community members, he says, have been asking themselves, “What needs to get done and who can do it?”

Temple Micah Rabbi Adam Morris agrees. From his perspective, the two faith communities have found that “we’re doing good and we’re pursuing justice and compassion, but the other great part has been … deepening our relationship.”

Another unforeseen outcome of housing Velasquez in sanctuary has been the upswell of support from the broader community. More than 90 regular volunteers give their time as either door monitors or overnight volunteers. These volunteers have come from within the church and temple, the broader neighborhood and throughout Denver.

Rev. Peg Newell, volunteer coordinator for sanctuary, provides support to others, and makes sure that those who are pitching in have Velasquez’s best interests in mind.

ICE is known for conducting raids early in the morning or late at night. Park Hill UMC and Temple Micah have protocols in place should agents show up at their building.

“That’s one of the principle reasons to have somebody [volunteer], especially at night when the cameras might be off and people might not be paying attention, to make sure that there’s somebody here who can act an intermediary, and provide visibility and shed light on those actions, should they occur,” said Holz-Russell.

“We had a scare where ICE went to Jorge’s place of work,” said Rev. Angie Kotzmoyer, associate pastor. Holz-Russell received the call from Velasquez saying she thought ICE was on their way.

Recalling that frightening day, Holz-Russell said, “I called everybody.”

“And everybody came,” said Rev. Adams.

Within a half an hour, nearly 20 people had gathered to bear witness and provide support. The raid never materialized, but the memory of that scare has not faded.

Imagining a world without sanctuary

Sanctuary has given Velasquez the ability to keep her family together, but it has also shown her that change is possible.

“I really believe that if more churches had the experience that Temple Micah, Park Hill [UMC] and I have had, where we learn to trust one another and share with one another deeply, that that would change the politics and the laws that we have,” she said.

“We see a neighbor in Araceli and her family that are in need,” he said. “I think God is providing volunteers, people who are interested and care about this, to make it possible. So, we gotta do it. We gotta put our faith into action.”

Both leadership from Park Hill UMC and from Temple Micah sited theological reasons for their sanctuary work.

“God didn’t create the borders that we so strongly want to protect out of fear,” Rev. Kotzmoyer said. “We should be helping people who are being threatened for their livelihood because of the borders we created.”

Ultimately, the hopes of Velasquz and of Park Hill UMC and Temple Micah are the same: That Velasquez and her family will be able to return to their own home.

Furthermore, said Rev. Adams, “we really want to live in a place where the idea of sanctuary isn’t even needed.”

So far more than 3,900 people have signed a petition in support of keeping the family together in the U.S.

Park Hill Parade Is July 4. Be There.