With a mid-season record of five wins and four losses, being over .500 represents a dramatic improvement over the 2021 COVID-affected season, when the East program finished 1-9 with numerous games ending with lopsided scores like 20-2 (versus Regis) and 20-0 (versus Colorado Academy).

East junior goal-keeper and Park Hill resident Charlotte Eastman attributes much of the improvement to Coach Macleay, who came to the University of Colorado in 2014 on a full scholarship from Annapolis, Maryland to play for the inaugural season of CU’s NCAA Division 1 varsity women’s lacrosse program.

A top-rated player in high school, the 28-year old Macleay ended up starring all four years for the Buffs as a play-making attack/midfielder. She ended her career having played 74 games (starting 72) scoring 97 goals and making 64 assists. Her senior season in 2017, Macleay helped lead the Lady Buffs to their first ever win over a Top 10-ranked team (Northwestern), a first appearance in the NCAA tournament, and finished as CU’s career leader in assists.

Goal-keeper Eastman, who lives on Krameria Street, is grateful to have a coach with so much experience and the desire to succeed. “She really wants the team to do well and believes really strongly we are one of the best teams out there,” says Eastman. “Every practice, she knows what she wants to accomplish and what she wants us to look like.”

Eastman also raves about assistant coach Miranda Stinson, a teammate of Macleay’s for two years at CU. Stinson, originally from Virginia, is described on the CU women’s lacrosse website as one of the best players in Colorado history. She scored 171 goals and had 53 assists over her career as a Buffalo, and received All Pac-12 honors in 2019. 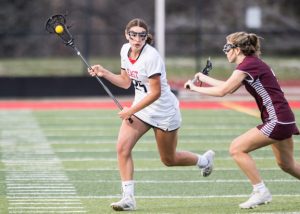 Eastman says that during practice Stinson and Macleay will get out their sticks, demonstrating drills and playing with the team to help get them motivated, “You can tell they know how to play and have been playing a long time.”

For her part, Macleay is equally thrilled to be part of the East girl’s lacrosse community. She is also enthusiastic about promoting the growth of girl’s lacrosse in Colorado, which she still views as slightly behind Maryland, where every high school had a girl’s lacrosse team.

Macleay says the East squad is still recovering from two years of COVID-19-affected sports, with games cancelled and practice schedules upended. But, she says, “The girls are amazing people.”

Macleay has also felt welcomed by the East girl’s lacrosse community. “I give all the praise to the parents, especially the booster club. The East community as a whole is wonderful. They treat the program as a family.”

East’s girl’s lacrosse regular season will conclude with two home games: against Fairview at 5:30 pm on Tuesday, May 3, and noon on Saturday, May 7 against Battle Mountain.

Park Hill Parade Is July 4. Be There.