An Odyssey To Find A New Home For Bartholomew and Ali

I’ve always dreamed about having chickens, and with all the time spent at home these days, the timing seemed right to make my dream a reality. We invested in materials, then designed and constructed a coop. It’s a few feet off of the ground, with a ladder for the chickens, a mono slope roof, large acrylic viewing window, two private laying chambers, fully opening clean-out doors, a clear plastic watering system, a radiant heater, two levels of roosts, and even a new apple tree planted right outside their living quarters.

We set some posts in the ground to make an enclosure. We also used a roll of chicken wire and gardening spikes to make a free range area for them in the backyard. They even have patio string lights. I was excited to get these girls, and to farm the fresh eggs from my backyard.

Quite a few years ago, I sent my two children to Poultry Camp at the Urban Farm in Stapleton. During camp they spent a lot of time with Silkie chickens, which are possibly both cuter and friendlier than most other breeds. When the time came to pick up our chicks from Feeder’s Supply in Fort Collins, the kids wanted to get Silkies.

We left the feed store that day with one Americana (who would lay beautiful light blue eggs), one Buff Orpington (known to be a friendlier breed and a productive layer of brown eggs) and four fluffy little Silkies (who would periodically lay smaller white eggs). The Americana and Buff Orpington were guaranteed to be female chickens. They are sex-linked breeds; the males are hatched one color, and the females are hatched another color. The females are sold as egg-laying hens.

Silkies don’t come sex-linked for various reasons. We decided that we ultimately wished for two Silkie hens, so left with four chicks. It isn’t legal to keep roosters in the city and county of Denver (by nature, they crow loudly in the early hours of the morning). Still, we thought that it wouldn’t be difficult to rehome the roosters when the time inevitably came. 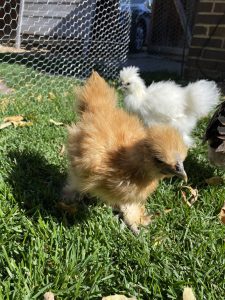 How did we expect to do that? We’d put an ad on Craigslist for free roosters, we thought, or we would take them to one of the many rooster sanctuaries in the area.

These were general ideas I collected as I queried on the internet or asked around at the local feed stores. Easy enough, right? Well, the chicks began to mature — there were now six chickens in a coop meant for three or four. I knew from the crowing that a couple of these guys were definitely roosters. It was time to thin the flock.

We realized we had a big problem.

As a person who eats chicken, I ought to be able to cull a rooster. Well it turns out there is absolutely no way I could personally wring the necks of either Bartholomew or Ali.

I did know that, statistically we’d end up with a couple of roosters. And so I’d made some calls right off the bat, lining up two potential rooster rescues — the Broken Shovels Farm Sanctuary in Henderson and another one in Hudson. But then I stalled, to make sure my gender speculations were correct.

Room in the coop

When I called back after some time had passed, to arrange the drop-off of the birds, the sanctuary staff was upset. Why hadn’t I brought the roosters in before, when I first contacted them? It was too late for them to bond to the flock now. That’s when they told me that they had received over 1,000 requests to take in roosters just this past year alone — and they no longer had openings for our two. They said they would need $1,000 in order to build a new coop for them, and wanted me to relinquish my entire little flock. I declined.

It was a stressful and shameful time for me, to say the least. I have to confront the fact that I have contradicting values which remain unresolved: I won’t cull a rooster and yet I am a consumer of eggs.

In the end, the Broken Shovels Farm Sanctuary took Bartholomew and Ali in after all. We’ve been there a few times in the past, on visiting days when the farm is open to the public. On those days, anyone can pay a few dollars and visit the friendly goats and adorable sheep running around.

And if you go, keep a look out for Bartholomew and Ali.

The website for Broken Shovels Farm Sanctuary is brokenshovels.com/.