The Denver-based Urban Land Conservancy is moving forward with plans to purchase the 25-acre Johnson and Wales campus at Montview and Quebec.

The conservancy, whose mission is “preserving, developing, stewarding, and managing permanently affordable housing and shared office space for nonprofits and mission-minded organizations” is under contract to buy the campus, said Director of Communications Angelle Fouther. The purchase price has not been disclosed.

The organization is working with Denver Public Schools to expand the neighboring Denver School of the Arts, which currently occupies the building on the north side of Montview, across the street from the campus. If the plan is approved, the arts-focused school would take over the four westernmost buildings on the campus.

“With regard to the remainder of the campus, [we are] focused on preserving the existing buildings for community-serving uses, particularly education,” Fouther said. “The work is still in process at this time.”

Last year, the Providence, R.I.-based Johnson and Wales announced plans to close its Denver site at the end of this school year, citing declining enrollment and the need to consolidate. The campus is previously home to the Colorado Women’s College and the University of Denver Law School.

On April 20, DPS sponsored a community Zoom meeting to discuss plans for the potential Denver School for the Arts expansion. Principal Anthony McWright noted that the school, with a current enrollment of about 1,100, is bursting at the seams. The expansion would allow for increased enrollment and also improved equity among the student population. The plan would need approval from the school board.

“We were all incredibly sad to see [Johnson and Wales] leaving the neighborhood, however, we’re eager to see what is planned for that beautiful space,” said Colette Carey, the Greater Park Hill Neighborhood, Inc. board member whose district includes the campus.

“We’re also encouraged that the Urban Land Conservancy and Denver School of the Arts are both involving the community in the evolution process, and that they both value that the history of that property is steeped in education and the hope is to maintain that storied tradition.”

More than 50 volunteers have hit the streets and parks of Denver in an effort to collect at least 10,000 signatures by June 18, hoping to secure a citywide vote in November to further protect the conservation easement on the Park Hill Golf Course land.

Colette Carey, a volunteer with YES for Parks and Open Space (yesopenspace.org), reports that as of mid-April, the group has held signature-gathering events in area parks, with many more planned in May.  The measure would require future voter approval for the city to remove tax-funded conservation easements.

“People [I’ve encountered] feel pretty strongly about this issue, and the response has been, we have to start protecting our parks,” Carey said. “I get comments about, why wouldn’t I sign this?”

Under the direction of then-Mayor Wellington Webb, in 1997,  Denver paid $2 million for the conservation easement on the 155-acre property at 35th and Colorado Boulevard.  Two years ago, the development company, Westside Investment Partners, bought the land for $24 million, with hopes to develop at least a portion of it. The golf course is currently closed.

Last year Denver’s Parks and Recreation citizen advisory board unanimously approved a recommendation that the city buy the land for a regional park. Earlier this year, however, the city’s planning office, in conjunction with Westside, kicked off what it calls a “visioning” plan to entertain concepts for potential development. City officials have not clearly articulated why they would support removing the conservation easement.

In March the city paid $21,000 for a survey designed to ask people living near the golf course land what they prefer for the 155-acres. The survey was immediately criticized by park advocates, as it provided respondents with two options: reestablishing the land as a golf course, or supporting “a variety of community-serving uses” — and then guiding respondents through a selection of development options.

“Additionally, there is no mention of the conservation easement in the survey which, to us, is a fatal omission for a statistically valid survey,” Carey says.

The future of one of the oldest homes in Park Hill is uncertain, after its owners filed a certificate of demolition eligibility with the city in March.

The Queen Anne-style house, at 35th and Albion and just across the street from the now-closed Park Hill Golf Course, was built in 1889. Known as the Robinson House, it was advertised in the May 5, 1889 edition of the Denver Republican newspaper as  offering “delightful air, scenery, pure artesian water,” and noting that, “away from the dust of the city, you will live 10 years longer.”

More recently it was home to two restaurants, Kate’s and The Garden. In recent years the house has fallen into disrepair, and the remainder of the block is being built out with rowhouse-style townhomes.

The house is on the National Register of Historic Places, but is not currently protected as a local historic landmark — though the city planning department has deemed it has the potential for such protections. Its owner is currently listed as MOJ Servicing, a limited liability company based in Greenwood Village.

Shane Sutherland, the historic preservation chair of Greater Park Hill Community, Inc., reported at press time that a group has filed a notice of intent to seek landmark status. In addition, the property now appears to be under contract with a new buyer, who may be “more preservation friendly” than its current owner. If so, Sutherland said, “there is  a chance that the Certificate of Demolition application may be withdrawn.” 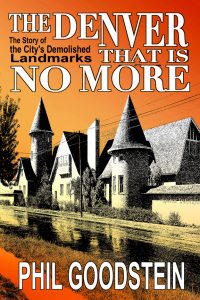 Park Hill is mostly missing from Phil Goodstein’s latest book, The Denver That Is No More: The Story of the City’s Demolished Landmarks.

Goodstein, author of many history tomes, grew up in Park Hill and previously explored the neighborhood in the highly-detailed Park Hill Promise. With a few exceptions, he says, Park Hill has generally done well in preserving its notable homes and landmarks.

The book focuses on the demolished landmarks that once defined the Queen City of the Plains, from the late 1850s to current times — lost when later generations deemed them dated, ugly, or obsolete. Included are the mansions of the rich as well as structures of the poor. There are chapters about lost hospitals, movie palaces, schools, and businesses. highlighting what Denver was once all about.

To be sure, Park Hill has changed.  In recent years, it has lost the “Hut” — the rambling historic home at 1980 Albion St, which was demolished last year. The former home of Kate’s Restaurant, at 3435 Albion St., is currently threatened with demolition  (see photo at left).

By understanding what the city has been and its defining buildings, Goodstein argues residents can grasp what Denver currently is and so shape its future.

The book is available at the Park Hill Bookstore, at 23rd and Dahlia Street.

The day of golf will include an innovative approach to the “longest drive” and hole-in-one contests.

Register to play at cityparkalliance.org.

City Park Alliance is a registered 501(c)3 nonprofit organization comprising board members whose memorable experiences in City Park are only eclipsed by their dedication to preserving and improving the park experience for others.

Color Art Installation To Be Uprooted

The Color Field art installation in City Park is slated to be removed, as it was a temporary exhibit.

The uprooting of the 6,000 brightly painted stakes will begin on May 7 at 8:30 a.m. Upon removal, the stakes are free to whoever wants them, and could be repurposed in neighbors’ gardens or for student projects or some other creative use.

If you’ve missed seeing Color Field, it’s not too late. Artists Sarah and Josh Palmeri, City Park Friends and Neighbors and City Park Alliance invite you to participate in the “evacuation” of this beautiful project.