Colorado’s newest professional sports team — the Colorado Summit Ultimate Frisbee squad — played its inaugural game on May 28 at the University of Denver before a raucous crowd.

After an exciting back and forth match, the Summit beat the Salt Lake City Shred 21-20. The game finished with a final hail-Mary throw by the Shred that was knocked down in the end-zone to seal the Summit victory.

Ultimate is a team sport played on a field approximately the size of a football field. It’s an exhilarating sport that combines the constant action of soccer, the quarterback and wide receiver play of football, and the astonishing leaping action of basketball. One feature of Ultimate is that top players can make throws nearly the full length of the field, resulting in exciting dives or jumps on nearly every possession.

The Summit play in the American Ultimate Disc League, a league of 25 teams across the country and in Canada. As of June 26, the team stands undefeated, with an 8-0 record.

On May 28, a jovial Colorado Gov. Jared Polis was front and center, outfitted in a Summit jersey decorated with the image of the cannabis dispensary sponsor, making the first ceremonial “pull” (throw) to start the match.

The governor told the Greater Park Hill News that he had “played a little pickup,” back in the day, but he still got some technique pointers from Summit players.

Park Hillian Jeff Capella, 51, and his daughter attended the first Summit match, not knowing what to expect.

“We were really impressed,” reported Capella, who has been playing Ultimate for 33 years in various leagues. “It was highly entertaining, and the league seems like a real celebration and exhibition of the sport. It’s very cool to now be able to see this in Denver, top talent all together putting on a real show for the crowd.”

Fellow Park Hillian Justin Bresler, 54, is also an Ultimate veteran, having played since he was a child, including playing on the University of Michigan’s club team. Bresler, who is the head of marketing for VISIT DENVER (and is also the founder and organizer of the July 4 Park Hill Parade) is also excited about having a pro-level Ultimate team in Denver.

“Denver has such a huge and experienced Ultimate community, so this is a dream come true,” he said.

With respect to Polis’s throwing technique, Bresler was diplomatic, “Um, the governor needs some practice. The good news is, he’s got plenty of good teachers here in Colorado.”

The Summit’s final home games of the season will be at the University of Denver on July 2 and July 30. All children age 12 and under are free.

Capella strongly recommended seeing the Summit in action. “You’re right by the field in the bleachers, up close to the action. It’s a great community feel at the games, with people tailgating beforehand and many people seeing friends they know from leagues, teams and pickup games. I hope folks who don’t play (yet!) will go watch a game.”

For more information and to purchase tickets, visit the Summit’s website, coloradoultimate.myshopify.com/ 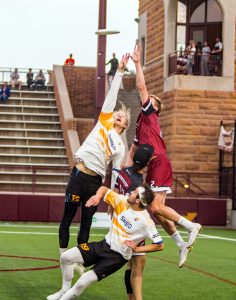 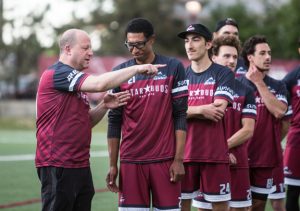 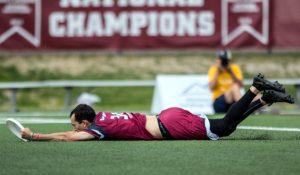 September Talk Of The Neighborhood