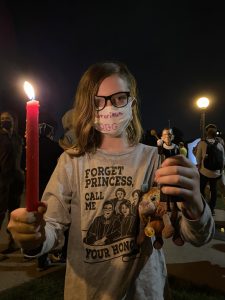 Dahlia Zimmerman-Voll, 11, joined hundreds of people who gathered in City Park on Sept. 18. The impromptu vigil occurred hours after news broke of the death of Supreme Court Justice and feminist icon Ruth Bader Ginsburg. Zimmerman-Voll described Ginsburg, the second woman appointed to the nation’s highest court, as her idol. Photo by Rebecca Zimmerman

News Analysis: Critical Moment Who We Are, What We Do, Our Mission