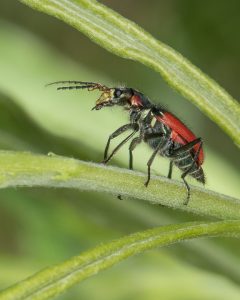 The Scarlet Malachite Beetle (Malachius aeneus) is one of 95 beetles found in Colorado and is common all over North America and the Middle East. Not so in the UK, however, where in recent years the organization Buglife has launched a special project to protect and repopulate the little beetles – including encouraging the public to report sightings. Scarlet Malachites are members of the soft-winged Flower Beetle family. They are black and red, and in the sunlight, exhibit a greenish hue, much like the mineral after which they are named. This beetle was photographed in Park Hill by Mark Silverstein.

The Status is Not Quo The Tour de Denver