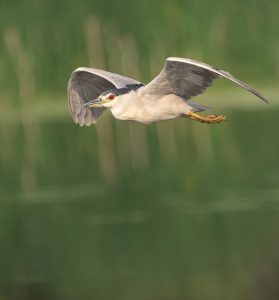 When you’re near a marsh or a pond or a swamp or a river, that loud, barking kwok! that you hear flying overhead at dusk signals a Black-Crowned Night Heron looking for dinner. Studies suggest that these black-crowned beauties feed at night because they are dominated by other herons and egrets by day. Scientists list the Black-Crowned Night Heron populations as stable, though their numbers probably declined in the 20th century owing to habitat loss and the effects of DDT and other pesticides. This heron was photographed at Bluff Lake by Mark Silverstein.

First Win Of The Season