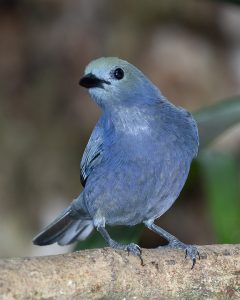 The Blue-gray Tanager is one of the most notorious and widely distributed birds in the tropics of the Americas. So while you won’t be able to find this bird in Park Hill, she’ll be everywhere if you head to Central Mexico, Brazil and even Miami. Unlike many other bird species, male and female Blue-gray Tanagers look the same, with pale gray underparts and sky-blue wings. The word tanager comes from “tangara,” which means “dancer” in the extinct language of the Brazilian Tupi Indians. This bird was photographed in Ecuador by Park Hill resident Mark Silverstein.