You see them all over downtown. The jarring images of Lincoln Park between the state Capitol and the Civic Center. In front of the Governor’s Mansion. At the Denver Public Library, Morey Middle School, at California and Welton Streets.

They are tent cities and encampments of the homeless – and often hopeless – of our society. On July 17, Denver Homeless Out Loud volunteers spread out to count all the encampments in the city. They tallied 664 tents, erected in 30 different camps. They are there because our city administration has done little to try and solve the problem.

After months of inaction, people living in nearby residences have been outraged by the growing presence of the encampments – appalled that little progress has been made to ease the suffering of people and address the problem. As this paper was headed to press, the camp in front of the Capitol was swept, and its 200 residents dispersed with few options. Temporary designated outdoor spaces for people without homes in Denver – which had been announced weeks earlier – have not yet been finalized.

They didn’t “Do Better”

During last year’s municipal election season, rampant homelessness, and the related problem of the lack of affordable housing, were the top priorities of most voters. We debated camping bans and the right to rest.

Some advocates for people experiencing homelessness proposed a controversial solution by repealing the city’s camping ban. It was maybe not the perfect approach, but at least it was something to consider in the place of an administration that had done little to address the problem – other than to say it was one of the most “difficult” problems we faced.

Yes, it may be difficult for the city, but it’s life threatening for people experiencing homelessness.

Last year’s effort to repeal the camping ban failed badly, in large part due to the $2.4 million campaign to defeat the measure that was run by the mayor’s friends. The well-heeled operatives adopted the tagline, “We Can Do Better,” but of course, they didn’t do better and neither has the City.

In fact, they have done next to nothing. There have been no new policies or plans. Ironically, they haven’t even enforced the camping ban that they claimed was necessary for health and safety.

Last year’s point-in time-census of the homeless estimated more than 4,000 people living on our streets. That number has surely done nothing but grow.

Until recently, none of the proposals floated by other candidates last year (yes, including me) were given serious consideration. Among them: Recruit property owners to place people without shelter in vacant apartments. Aid homeless providers by consolidating and streamlining the permitting process for new or expanded facilities. Give homeless providers timely notice of the closing of other shelters. Build tiny home communities.

The administration has done none of these. And, until recently, the city actually opposed creating secure outdoor encampments with amenities like showers and port-o-potties and laundry facilities, with other human services integrated.

And then the coronavirus hit. Now we have a real mess on our hands.

The images are jarring to see. Imagine living it. Being outside during the full throes of a pandemic, people without permanent shelter must be terrified – just as we all fear for our own safety.

A year and a half after the municipal election, amid worsening conditions, the administration recently announced a desire to create city-approved camping sites in the city. The mayor then passed the buck to eight City Council members who had publicly expressed alarm over the situation, asking them via email to identify potential sites for the camps in their districts.

Most recently, as of press time, the administration has offered up the possibility of using the Denver Coliseum lot plus two other unspecified sites, all limited to 50 people. That equates to less than a drop in the bucket.

During his press conference, Mayor Michael B. Hancock actually cited the pandemic – and not the plight of people experiencing homelessness – as the deciding factor for the “emergency step.” “The situation has deteriorated to the point where we must work and move to reduce risk now,” the mayor said.

The outdoor encampments are a temporary measure, the mayor emphasized – without addressing any more permanent efforts to address Denver’s homeless crisis.

As for the highly visible, unsanctioned camps downtown, the city will work “quickly” to break them up. It’s an enforcement effort that is almost certain to displace more people, as the encampments – if they are ever actually established – aren’t currently planned to hold anywhere near the number of people on the streets.

Our brothers and sisters

Meanwhile, Councilwoman Robin Kniech, a Park Hill resident, has discussed plans to move forward with a permanent increase to Denver’s sales tax of 2.5 cents on every $10 spent to fund services for the homeless. The administration has expressed support for the measure that is planned for the November ballot. 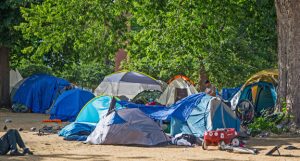 But, consider this cautionary note from Terese Howard of Denver Homeless Out Loud:  “Until we have adequate housing options for all these people, we’re going to have to learn to live together in these public spaces.”

Both the “temporary” encampments and the tax funding will be helpful, but prepare for a surge in the ranks of people experiencing homelessness. Some say the numbers will grow by as much as 40 percent from where we are now, due to the economic impacts of the pandemic and an expected rise in evictions.

Just like with the coronavirus pandemic, we are all in this homeless pandemic together. Let’s come together Denver, to address these problems. We are our brother’s and sister’s keeper.

Penfield W. Tate III is an attorney in Denver. He represented Park Hill in the Colorado House of Representatives from 1997 to 2000, and in the State Senate from 2001 to February 2003. A candidate for mayor of Denver in 2019, Tate’s opinion column returned to these pages last December. He lives in Park Hill.

Stories For The Ages A Few Bloody Days Of August, 1920